For those in the software game, there are few bigger events than the annual Microsoft Worldwide Partner Conference (WPC), which took place July 10-14 in Toronto, Canada. Our associate Lindsay has the scoop on some of the biggest new ideas and technologies on display.

This year’s WPC drew in more than 16,000 attendees representing every region on the globe — the idea is to get all of the best minds in IT together and see what happens. Because the audience is mainly C-suite stakeholders, they are able to have the right conversations and make the deals that need to be done. The companies in attendance include some of the biggest names across multiple industries: Dell, Hewlett Packard, Dropbox, and Cisco are all major sponsors.

The conference was kicked off by a number of major announcements from other big players: GE announced it would bring its Predix platform for industrial internet and IoT to Microsoft’s Azure cloud, along with integration with Office 365. Microsoft CEO Satya Nadella also spoke about the company’s recent unveil of Microsoft Dynamics 365, which, as Nadella says, will “empower business users with built-in insights and intelligence within the business applications they’re working in — apps like field service, sales, finance, operations.” 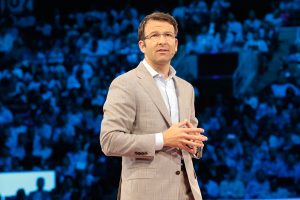 Office 365 also had a banner year, as evidenced by the talk around its success at WPC — Microsoft says there’s now more than 70 million people on the system, and Facebook announced that it will move its 13,000 employees to the system in the near future. Tim Campos, CIO of Facebook, says of Office 365: “Not only is it a mature and comprehensive platform, it meets our stringent security standards, it complements how we work with intelligence, flexibility, and it is continually evolving.” They join Heinz, Carlsberg, Johnson Controls, Atkins and others.

Another major component of this year’s WPC was hardware, which has already made headway in certain industries in two forms: HoloLens, a mixed-reality headset, and Surface tablets. Japan Air will use HoloLens to better train flight crews and mechanics — by projecting holograms onto the nearby environment, a mechanic can more easily see, for example, how certain parts are meant to fit together. With more businesses wanting to bring devices into the field or onto the plant floor, the energy around tablets means more capacity and connectivity to come in the future.

As exciting as these announcements are, some of the best work at any WPC gets done in meetings and sessions. We’ve found that simply putting forward-thinking leaders in the same room together equates to major developments and new ideas. For SMBs, these discussions often lead to pushing the company into entirely new territory, whether that’s allowing the expansion into a new region, into a new product category, or, for the very fortunate, out of the SMB space entirely.

We’ve already returned with better ways and new technologies for Business Intelligence 101 to better serve you, whether you’re an existing customer or one who is just now looking into the cloud. According to Gavriella Schuster, Corporate VP, Worldwide Partner Group at Microsoft, “cloud spending will exceed $500B by 2020, and nearly 80 percent of customers are deploying or fully embracing cloud technology today.” There’s really no better time than now — the 2017 conference will undoubtedly unveil improved technologies, but this year is already brimming with possibilities. We can’t wait to see what companies are able to get done by next July.